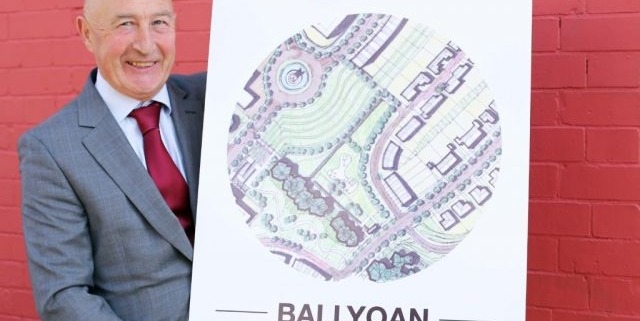 Members of Derry City and Strabane District Council’s Planning Committee today gave the go ahead for a major private residential development comprising 750 new homes at Ballyoan in the Waterside area of the city.

The plans represent an investment of £100m by development company South Bank Square Ltd. It’s the latest tranche of housing to be announced for the Crescent Link and will relieve housing stress in the city, as well as creating employment in the area over the duration of the building work.

The significant H30 site spans 37.5 hectares and is located to the east of the Clooney road overlooking the Caw roundabout and surrounded by the Clooney Road, Rossdowney Road and the Crescent Link.

The neighbourhood development will also feature a small convenience retail and professional services, as well as the provision of formal and informal open and play spaces. Access will be via a new signalised junction at Gransha, with conditions stipulated by planners to improve the Caw Roundabout and Gransha Junction as part of the works.

Mayor of Derry City and Strabane District Council, Councillor John Boyle, welcomed the news, saying: “This is a major development for the city and welcome news for home buyers. The creation of responsibly designed new neighbourhoods with good quality housing and amenities is a key priority of the Local Development Plan for Derry and Strabane. I am particularly pleased to see that these plans will also involve the improvement of the road infrastructure in the area around the Caw Roundabout. I look forward to seeing the plans move now to the next stage and work beginning on site as soon as possible.”

Speaking after the meeting, Chair of the Planning Committee, Councillor Warren Robinson, said the development would have a positive impact on the city. “I am delighted to see these plans progressing,” he declared. “The sheer scale of the development will have a major impact on the area and the entire city in terms of creating much needed quality homes for new buyers.

“It’s also positive news for the local building trade as developers anticipate the work will create 90 full-time jobs for the ten years of construction involved. I look forward to seeing the more detailed plans bring brought before planners and to the creation of a vibrant, modern new neighbourhood in the Waterside area.”

The 750 homes will include a range of housing designs, with detached and semi-detached homes, apartments and town houses. Developers have outlined plans for significant improvements to the road infrastructure in the area, as well as a bus service to service the development.

Members of the Planning Committee praised the efforts of the developers in addressing some of the ongoing concerns around the Caw Roundabout and the Crescent Link road, with proposals for an overhaul of the current system including a signalised junction at Gransha and a slip road from Crescent Link on to Clooney Road, easing the flow of traffic in the area. A free travel card will also initially be made available for those who move to the area to encourage public transport usage. The exciting plans include generous play facilities and green open spaces for the new neighbourhood as well as cycle routes and linear paths.