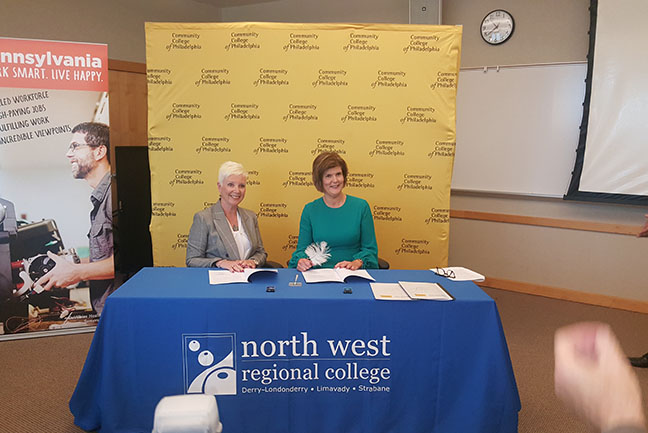 North West Regional College (NWRC) has signed two Memorandums of Understanding in the United States, signalling its commitment to international co-operation with other education partners. Samantha Traynor, Vice Principal of North West Regional College has travelled to Philadelphia with the College’s European Projects Officer Bronagh Fikri, to sign a MoU with the Pennsylvania Department of Community and Economic Development and the Community College of Philadelphia.

Mrs Traynor was part of a high level trade and investment delegation to Boston and Philadelphia lead by Mayor of Derry City and Strabane District Council John Boyle, and Seamus O’Domhnaill, Cathaoirleach of Donegal County Council. The visit was part of the ongoing positive work being done by the two Councils to establish strong economic development links and initiatives in the US and will build on the work done over the last number of years in promoting the North West region as an attractive investment proposition and on developing new market and network opportunities for businesses from Donegal, Derry and Strabane areas.

A number of companies from the North West are involved in the trip, as well as third level and further education providers and development organisations from across the North West including Ulster University, Letterkenny Institute of Technology, North West Regional College and Udaras na Gaeltachta.

Speaking at the signing of the MoU Mrs Traynor said: “The signing of this MoU in an important event for our College, it’s a great day and one that sees us formalise our educational partnerships, that we have been building and consolidating over the last two years with the wider Penn State through the Department of Community and Economic Development and also with the Community College of Philadelphia.

“The MoU represents the first step in building and consolidating a partnership through education and training with a specific focus on sharing best practice in Work Based Learning to include Traineeships, Apprenticeships including Higher Level Apprenticeships and also the continued professional development of our respective professionals in our workforce.

“There is much to work on together and today marks the next step in building and consolidating that commitment for the benefit of all of our students in the NW City and region in our part of Ireland, in Philadelphia and in the wider state of Pennsylvania.”

US investors are told that the North West of Ireland is ‘the gateway to...

US investment delegation from the State of Pennsylvania visit Derry, Strabane...
Scroll to top