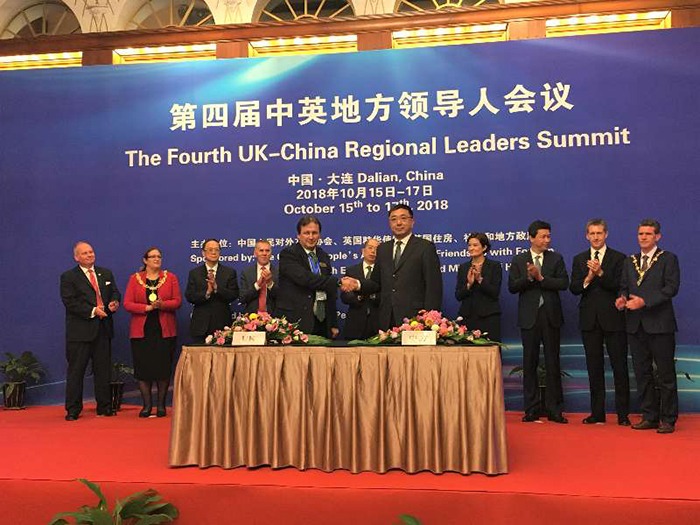 An October trade mission to China as part of the 4th UK-China Regional Leaders Summit that was held in Dalian, has been hailed as a huge success by Derry City and Strabane District Council who led the delegation from Northern Ireland.  The local delegation accompanied by senior representatives from Central and Local Government, Invest NI, Queen’s University, Ulster University, the North West Regional College and other education and business partners had a number of meeting while in the host city of Dalian in the Liaoning Province.

Speaking following the five-day visit, the Mayor of Derry City and Strabane District Council Cllr John Boyle said the visit was significant in terms of profiling our region and getting a unique insight into the Chinese tourism, business, technology and education sectors.

This is the 4th UK-China Regional Leaders Summit and Derry City and Strabane District Council was the lead Council as a result of its existing relationship with the host city of Dalian where it signed a Friendly Co-operative City Agreement last year to formally acknowledge the strong working relationship between the two cities and regions.

Speaking on his return from the visit, the Mayor said links with China are hugely important in assisting us to expand our business, tourism and education connections.

He welcomed news of the signing of an official MoU between the North West Regional College and Dalian College during the visit.

He said: “I was very impressed with the visit and the way in which we were so warmly welcomed to Dalian by officials who were genuinely interested in how we can work in collaboration for the mutual benefit of both cities and regions.

“The visit was extremely worthwhile in allowing us to get a real insight into their economy and culture.

“We are starting to see the outcomes from the signing of the Friendly Co-operative City Agreement last year and are delighted that our partners, the North West Regional College have signed a Memorandum of Understanding with Dalian College.”

The Mayor added that the city of Dalian is hugely significant in China.

Based in North East China, the City of Dalian is a global financial centre with a population of over 6.5million and specialises in the Financial and IT sectors.

It is also home to some of the major players in these industries including Oracle, IBM, CISCO and Convergys.

“Derry and Dalian have a lot in common and we were delighted to be able to continue with the work done so far through our Co-operative Cities relationship so that we can encourage more investment, more international students and tourists to our city and region.

“It’s a very important part of our commitment set out in the Strategic Growth Plan and I am confident that as a result of this visit we can continue to bring positive connections and links between the two cities,” he concluded.

US investors are told that the North West of Ireland is ‘the gateway to...
Scroll to top